Purpose of a currency (with history lesson)

Where does the need for money come from? And what's money?

We'll mostly look into Chinese history, because all the important inventions in currencies happened there. Except maybe the cowry shell money, but we don't know.

Stone age society started with share economy: When you had something in abundance, you'd share it with your larger family, the small tribe you were associated with. You'd expect the other members to share their prey or whatever they had to share with you, too. You can do that, because there's trust and established relationship.

When society grew larger, this no longer worked. You would trade things, e.g. meat vs. plants or tools. The obvious problem with that is: you need to find someone who has a need for your thing and at the same time provides something you have a need for.

That could be solved by exchanging tokens that everybody considered valuable, that were easy to carry, but rare enough nobody could get them too easily: That is the birth of money. The first known money mankind used (earliest at least 30000 years ago) was “shell money” or “cowry money”, shells of maritime snails (in Chinese: 貝/贝 “bei”, still means “money” as well as “cowry”). They were picked up at the shore, so you had to invest a certain amount of work to get them.

Shell money was the more valuable the further away from the shore, so when metallurgy was invented, the people from the mountain came up with shiny metal coins as hard to get but easy to carry and longlasting valuables, creating silver and gold standards for currencies. Both shells and noble metals can serve as jewellery, so it's not completely useless, but the main purpose for money is a proxy for exchanged values, so you can exchange the things you have and the things you need with different persons. The money itself decouples the individual acts of trade.

The work to get the shell or the coin is only invested once, but the coin remains an interchangeable object of value, it can be traded many times.

These scarce tokens were chosen to ensure that you need a certain amount of work to gather them, so when your time has a value, you wouldn't waste too much on collecting shells or mining gold. The problem is: these things have an upper limit of availability (even if more people collect or mine them), and when society and economy grows, you run out of tokens, and grafting more just for the sake to haven enough coins is a waste of ressources: You'd rather spend your time with the actual real products, instead of running after the next gold rush.

This leads to deflation, and in deflation, people tend to hoard their money (spending it tomorrow gets you more than spending today), which creates an economic downcycle, and deflation gets worse. If it was just lack of work to get the tokens, society would ramp up collecting shells and mining noble metals, but if there is a natural limit to get more shells or gold, you need another idea.

The first early forms of banknotes were financial products, the promissory note. Instead of actually paying, you just gave the promise. That allows to inflate the amount of available money to keep business going, because now almost any valuable, even real estate, could be converted into easy to carry paper. Song dynasty China e.g. had a booming economy (with an estimated 200 billion coins minted), and the availability of cash to exchange the vast amount of traded goods was always a problem, even with this large amount of minted coins.

The earliest form of banknotes were check-like promissory notes, issued by banks, which promised coins in exchange; the notes themself (飞钱, feiqian, flying money) were very popular due to the shortage of actual coins. In the late Tang dynasty the first such notes appeared, and became quickly popular.

These notes were produced and cashed in by banks. In 1024, the first state-issued feiqians were issued, and in the 12th century (in the southern Song dynasty), the 会子(huizi) was established as legal tender. 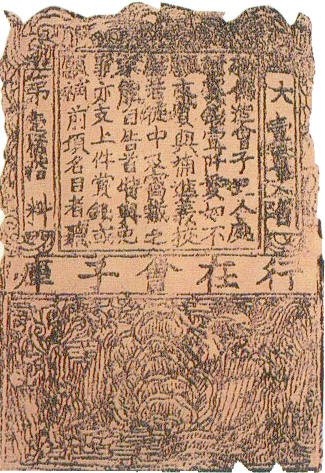 Song dynasty banknotes had similar properties to gold standard dollars, they could be turned into metal coins. And of course, forgery became an issue, because the whole point of paper money is to make it quick and easy to produce, and regulate the amount of money in circulation by authoritive decisions, not by how much work was available for doing that job. The money got stamped with seals which were difficult to make, but could be used for many notes, and can be kept under control. That is a proof of ownership and authority: You can issue a note if you prove that you own the seal. The seal owner is not anonymous, it's a government clerk.

The Song dynasty's huizi was somehow experimental, and took care to base the paper money's value on bronze (northern Song) and silver (southern Song), with bronze price fluctuating a lot in southern Song.

The following mongolian Yuan dynasty took the concept further to the first fiat money. They didn't allow private ownership of silver and gold (compare: Roosevelt's America after the great depression), so the banknote was not a promise to give you noble metal. Inflation was a problem in both the Yuan dynasty and the early Ming dynasty following, which stopped issuing banknotes in 1450; the circulating notes however were still accepted — and the currency system was privatized, i.e. they went back to the feiqian promissory notes.

Thanks to Marco Polo, Europe soon got a pretty good description of how it worked, because Marco Polo as merchant was interested in this kind of things. One reason why the banknote didn't catch on at that time was that neither paper nor a sufficiently good printing press were invented here. In the western world, banknotes were usually exchangeable with noble metal coins until 1970, when Bretton Woods broke.

However, most contemporary money transactions are no longer cash, neither coins nor banknotes, they are “fiat money”, money that's only in the books, and only has a promise to be exchanged with banknotes, and the notes are not a promise to get you noble metal.

The act of creating “fiat money” is an act of state, the central bank lends money to other banks, money it doesn't actually have, and when it gets it back, it is removed from circulation. This is something that seems to be pretty difficult to understand, because the concept of money used to be valuable tangible things, not numbers in an electronic ledger. And that it is a political decision how much money to create or let disappear is of concern to those who don't trust politicians — even if the lawmaker only sets rules for the conditions to create and annihilate book money, it is unclear to many people why these rules make sense. A lot of early fiat money experiments ended in hyperinflation, and a return to some noble metal standard.

However, the lessons were learned, and today, most fiat currencies are pretty stable, and survive even major disruptions of the economy. Money in the information age is just an entry in an electronic ledger. It's backed by the economy, and it's availability is adjusted to keep it pretty stable.

But the only security these ledgers have nowadays is that it require physical access to the computers that hold it. And we know how secure computers are. The idea of a crypto currency therefore is to provide security of these ledgers through mathematical magic.